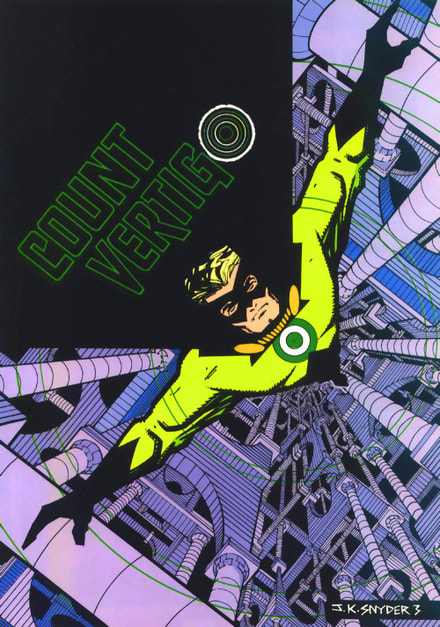 43 years ago - Werner Vertiz is born the crown prince of Vlatava. He recieves a cybernetic implant to compensate for his deafness.
16 years ago - 27-year-old Werner engineers the death of his father to become king.
10 years ago - 33-year-old Werner Vertiz is deposed by his people.  He retreats to America in exile, while his younger sister takes the throne.  He goes to Star City where William Tockman pays to alter his implant, granting him broad-spectrum disorientation abilities.  He has diplomatic immunity as a royal member of a foreign government, but still regularly clashes with Green Arrow as Count Vertigo as he works with Tockman.
8 years ago - 35-year-old Werner Vertiz agrees to work with Johnny Sorrow's Injustice Society.
7 years ago - 36-year-old Werner Vertiz's diplomatic immunity is removed and he is finally imprisoned by Green Arrow.
4 years ago - 39-year-old Werner Vertiz's sister dies, leaving his young niece as the new Queen of Vlatava.
3 years ago - 40-year-old Werner Vertiz attempts an assasination of the young queen.  He is stopped by the new Green Arrow, and he is again imprisoned.
1 year ago - 42-year-old Werner Vertiz is freed from prison by Gorilla Grodd.  He joins the Legion of Doom, having his implants again modified to allow for even broader implementation of his abilities.
DC has literal armies of highly useful villains like Count Vertigo; singular concepts that were designed for stand alone stories and then put into a backlog of characters for different writers and artists to dig out and retool over the decades.  In time the characters whose look or design caught those writers attention more often got more attention, and Vertigo is certainly that.  While it's only in the last decade or so that he's really been evolved into a character that can carry a story on his own, he's long been recognized for his look, his powers, and the general utility of his design.  Still, there IS a complete character in there, and we don't even have to look to hard to find him.