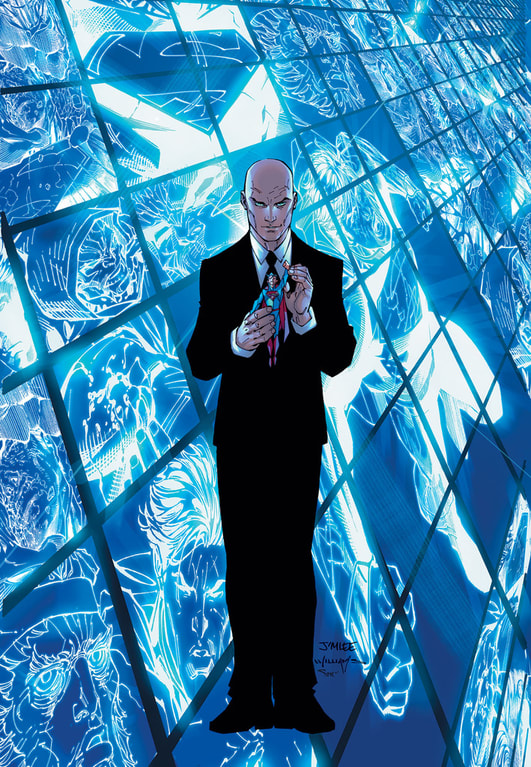 49 years ago - Lex Luthor is born the son of Lionel Luthor, wealthy industrialist.
42 years ago - 7-year-old Lex's father looses everything.  They are forced to live in Metropolis's Suicide Slums.
39 years ago - 10-year-old Lex's mother dies, her treatment too expensive for his father to afford.
38 years ago - 11-year-old Lex stages his father's death when he realizes the insurance payout is all he will ever get from his father.
35 years ago - 14-year-old Lex uses his inheritance to pay for his early admission to MIT.
33 years ago - 16-year-old Lex graduates from MIT and uses his remaining inheritance to start LexTech.
31 years ago - 18-year-old Lex has his first marriage.
30 years ago - 19-year-old Lex has his first divorce.
28 years ago - 21-year-old Lex has his second marriage and second divorce.
27 years ago - 22-year-old Lex founds Lexcorp, incorporated in Metropolis.
25 years ago - 24-year-old Lex has his third marriage.  His wife mysteriously disappear.
​21 years ago - 28-year-old Lex grants control over the Metropolis drug trade to Tobias Whale forcing a truce with Bruno Mannheim that limits Intergang to weapon smuggling.
20 years ago - 29-year-old Lex separates from the Contessa Erica Alexandre Del Portenza.
19 years ago - 30-year-old Lex receives Metropolis's key to the city.
15 years ago - 34-year-old Lex dates upcoming hotshot reported Lois Lane.  Lexcorp aquires Schott Toys to utalize their robotics patents, causing Winslow Schott to have a public breakdown.
14 years ago - 35-year-old Lex watches as  Mercy Graves, having been caught stealing from him, beats all his bodyguards.  rather than turn her in, he cleans her up and hires her as his valet & bodyguard.
13 years ago - 36-year-old Lex watches as Superman first appears in Metropolis.  He is first interviewed by Clark Kent.
12 years ago - 37-year-old Lex buys most of the world's supply of Kryptonite and begins wearing his custom Kryptonite ring. Winslow Schott begins staging violent attacks against Luthor with his weaponized toys as the Toyman. He is stopped by Superman and placed in a prison for the insane. He withdraws his support of Tobias Whale seeing the damage Black Lightning is doing to his organization, instead moving the Metropolis drug trade over to Bruno Manheim's Intergang.
11 years ago - 38-year-old Lex's experiments with alien biochemistry turn Rudy Jones, a Lexcorp Labs Janitor, into the Parasite.
10 years ago - 39-year-old Lex is instrumental in the defeat of General Zod, when he kils Non.
8 years ago - 41-year-old Lex attempts to clone Superman, accidentally creating Bizarro.
6 years ago - 43-year-old Lex discovers that he is dying of cancer from his Kryptonite ring.  He stages his death, moving his consciousness into his own clone, posing as Luthor Jr.
5 years ago - 44-year-old Lex's apparently 23-year-old clone uses Cadmus to grow a human//kryptonian hybrid clone, but it's accelerated growth is interrupted.  It takes the name Superboy.
4 years ago - 45-year-old Lex's clone rapidly ages.  He stages his own return, claiming Cadmus was holding him.  Has Mercy Graves brought out of her coma and gives her a weaponized cybornetic arm. He rebuilds Metropolis after the attack by Doomsday, using this as the platform for his presidential campaign.  He wins the election and is elected president.
3 years ago - 46-year-old Lex uses experimental technology to redirect an earthquake to hit Gotham and cuts it off from relief so that he can declare it a national disaster zone and repair it, strengthening his presidential platform.  He secretly forms the Injustice Gang to battle the Watchtower, using a second team to nearly defeat them.
2 years ago - 47-year-old Lex attempts to frame Bruce Wayne for murder in retaliation for his speaking out against his response to Gotham.  He hires David Cain & Danton Black to kill him, but Cain retreats when he is defeated by Cassandra Cain.  He diverts a meteor to nearly strike the planet, framing Superman.  He is exposed by Superman and Batman with the help of the global-monitering of Winslow Schott, and attacks them with his battlesuit, losing the presidency.
1 year ago - 48-year-old Lex is exonerated in court.  He retakes control of Lexcorp with diminished resources.  Mercy Graves rejoins him. He is invited to join Gorilla Grodd's Legion of Doom, but declines.  He donates funds to the mysterious Q Society in exchange for access to certain technology pattents, causing Uno to cut ties with them.
now - 49-year-old Lex is comissioned by the government to extract data from the Brainiac nanomodules.
Lex Luthor is one of the single most recognizable villains in comics.  So much so that he's actually become a bit of a cliche; even people that aren't fans of superheros (they exist, I've met them) will immediately recognize him.  Most bad guys will have their stories change wildly over the years as they are redesigned to serve the characters they battle, Lex has been around and been at the forefront of the story for SO long he actually has more than one fully-formed comic identity.