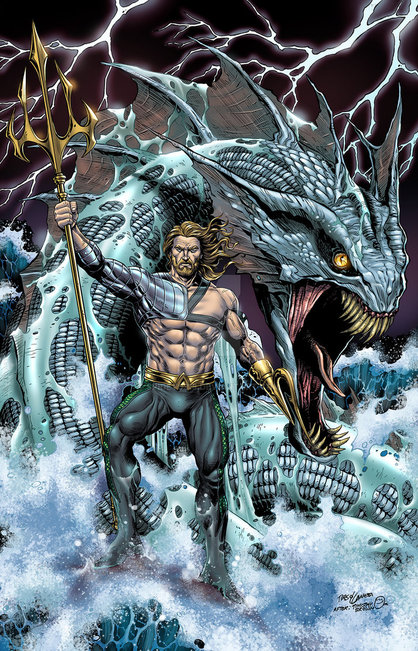 41 years ago - Arthur Curry is born, the son of Tom Curry, a human lighthouse keeper, and Atlanna, an Atlantean Queen exiled from her people's kingdom in a coup.
39 years ago - 2-year-old Arthur's parents Tom Curry & Atlanna are attacked by Atlantean Shock Troops.  They fight them off, but it appears that Atlanna is killed.
30 years ago - 11-year-old Arthur befriends Porm the dolphin, and begins exploring the strange powers of his Atlantean bloodline. His father Tom Curry begins to realize that his son has a larger purpose. ​
26 years ago - 15-year-old Arthur gets his father Tom Curry's blessing to venture out into the open ocean, beginning to have adventures.
19 years ago - 22-year-old Arthur first reveals himself to the surface world, who dub him Aquaman.
​18 years ago - 23-year-old Arthur battles Black Manta for the first time when he stops him from raiding a freighter.
​17 years ago - 24-year-old Arthur battles Nanaue for the first time.
16 years ago - 25-year-old Arthur is one of the founding members of the Justice League.
14 years ago - 27-year-old Arthur thwarts Black Manta's preliminary attacks on Atlantis.  When Orm Marius realizes that he is the lost son of Atlanna and the true heir to the throne of Atlantis, he imprisons him.  There Arthur meets Vulko, who teaches him his heritage and helps him escape.  He talks to his father Tom Curry, deciding that it falls to him to liberate Atlantis.
12 years ago - 29-year-old Arthur is contacted by Garth, an escapee from Idyllis, an Atlantean penal city housed within the alternate dimension Xebel. together they breach the barrier into Idyllis and free the prisoners.  They are captured by Black Manta's forces, but escape with the help of Kaldur'ahm, destroying their ships. Garth becomes Aqualad and joins the original Teen Titans while Arthur prepares to retake Atlantis.
11 years ago - 30-year-old Arthur is attacked by Mera. When he allows her to walk away from their battle, she joins his crusade against Atlantis.  He retakes the Atlantean throne, and imprisons Orm Marius in the palace. Black Manta's forces attack Atlantis in the aftermath of the coup, but finds them ready to follow their new king. Kaldur'ahm plays a vital role in defeating his forces, and earns the right to begin his training early with the Atlantean military, moving to Atlantis.​
9 years ago - 32-year-old Arthur, feeling he can trust his half-brother, permits Orm Marius to leave his prison and join the Atlantean Court to attend his wedding to Mera.  The Justice League collapses. Nanaue begins attacking the outskirts of Atlantean territory, until Arthur stops him.
8 years ago - 33-year-old Arthur rebuilds a new Earth-based Justice League.
7 years ago - 34-year-old Arthur & Mera have their son Arthur Curry Jr. Orm Marius escapes Atlantis and begins amassing followers, forcing Arthur Curry to leave the role of leader of the Justice League to Batman so that he can protect his city, remaining a reservist.
6 years ago - 35-year-old Arthur protects Atlantis from Orm Marius and Black Manta when they attack the city together.  Manta betrays Orm to kidnap Arthur Curry Jr, leaving Mera in a coma.  Arthur quests to save his son, with the help of Dolphin.  He sacrifices his hand to save his son's life and almost dies of blood loss before Dolphin brings them back to Atlantis.  He has it replaced with an Atlantean war-hook.
5 years ago - 36-year-old Arthur is forced to battle Mera when she recovers from her coma, and attacks both him and the city in her rage, believing to have lost her son. She is only stopped when she discovers Arthur Curry Jr is alive.  She chooses afterward to remain in isolation to repent her attack.
3 years ago - 38-year-old Arthur joins the Watchtower. Mera returns to the throne and Kaldur'ahm works to defent Atlantis in his absense, earning the name Aqualad.
now - 41-year-old Arthur & Mera cross the barrier into Xebel when she & Vulko finds evidence that they are preparing to invade.
Aquaman is a joke of a character who is useless out of water and whose only power is talking to fish. That is, unless you've ever read any of his comics.

Then you might have noticed that he's one of the most powerful characters in the DC lineup whose comics are among the most consistently entertaining reads DC has ever put out.  Innovation vs recognizability is clearly a constant battle with Aquaman.  You want a character everyone immediately recognizes, but for some reason no one seems to be able to let go of the comic take on the character from the fifties.  Nevermind that EVERY comic book character had ridiculous, child's-imagination adventures during those decades.  For every picture of Aquaman water-skiing on porpoises, there's a picture of Batman wearing an apron taking muffins out of the oven. Very few characters have undergone more drastic changes in their tone and image than Aquaman, but none of his redesigns are allowed any permanence.  So it falls to us to create a singular version of his story, and oh my god, this one was fun.