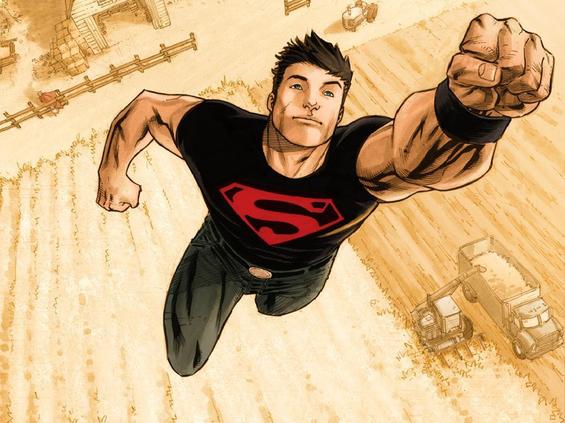 5 years ago - When Superman is killed by Doomsday, Cadmus labs accelerates it's attempts to clone him, secretly using Lex Luthor's cloning technology. The Clone reacts to it's rapid growth & learning programs and escapes their custody, severing his ability to ever age.  He takes the name Superman for himself, although everyone calls him Superboy. He assists in the fight against Hank Henshaw & Mongul. After Superman returns, He relocates to Hawaii, where he fights Nanaue & Caitlyn Snow.
4 years ago - Superboy joins Young Justice, where he meets Cassie Sandsmark.  He begins to develop a relationship with Clark Kent.
3 years ago - Connor has a crush on Traci Thirteen after she helps him in Hawaii.  After the battle that killed Donna Troy, Cyborg builds a new Teen Titans which Superboy joins.  When Superman opens up to him about his identity, Superboy takes the name Connor Kent, and moves to Smallville to stay with Ma and Pa Kent, where he meets Kara Zor-El. Superman introduces him to 10-year-old Krypto, who comes to stay with him in Smallville.
1 year ago - Connor joins all the surviving Titans on the homeworld of the Titans of Myth to save Donna Troy.  He and Cassie Sandsmark begin their relationship.
now - Connor is killed by Hank Henshaw.  His remains are sealed in a tomb on Mars.  He later returns, having been rejuvenated in the future and sent back by Brainiac 5, now able to age.  He recovers his own body and entombs it within the Phantom Zone.
2995 - Connor Kent's body is recovered from the Phantom Zone by Querl Dox. He is revived, and re-engineered to allow him to age.  After some time with the Legion of Super-Heroes, Querl manages to align his temporal technology to send him back.
There is a lot to unpack with Superboy, both because of the massive influence the original incarnation of Superboy exerts on the history of Superman's history specifically and DC in general, but also because the modern character's depiction over the course of his existence is such a perfect microcosm of the evolution of the company over that period.  He was introduced in a burst of creative nonsense during the nineties, and then grew into a far more nuanced character into the early aughts before he became a casualty of a company-wide crossover, doing irreparable damage to his regular series. There have been several attempts to recapture his appeal in the comics, but currently the best depiction of the character is in a wildly popular animated series that was canceled over poor toy sales, only to be brought back thanks to massive fan demand, but only viewable on DC's standalone streaming service.  If that isn't a perfect encapsulation of the state of DC's characters, I don't know what it is.

(Fun fact; apparently, Geoff Johns pitched the idea that Superboy's human parent was Lex Luthor back when he was Richard Donner's assistant and was laughed down... which is funny because he went on to have so much editorial power in DC he could make Lex Luthor EVERYONE'S father and no one can stop him.)