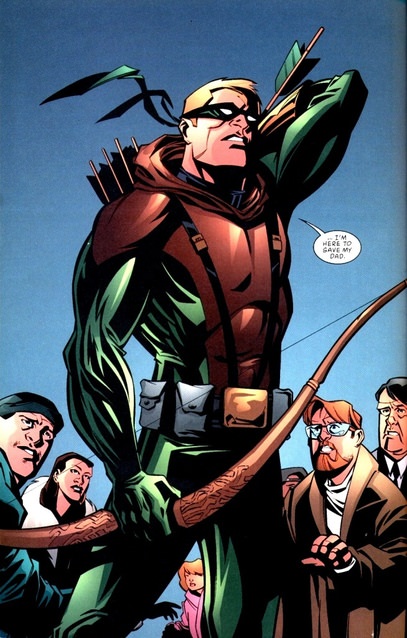 25 years ago - Connor Hawke is born, the son of Oliver Queen.  His mother takes refuge in a Tibetan ashram.
9 years ago - 16-year-old Connor is confronted by the monkey cult, and earns a place among the world's martial arts elite.
6 years ago - 19-year-old Connor first meets his father Oliver Queen.
5 years ago - 20-year-old Connor begins to train with 12-year-old Mia Dearden.
4 years ago - 21-year-old Connor takes over the role of Green Arrow when Oliver Queen retires after he is forced to kill Hal Jordan.  His work to stop William Tockman leads to the attack on Dinah Lance's flower shop​.
3 years ago - Realizing that Mia Dearden needs more than just therapy, 22-year-old Connor decides that she should become the new Speedy. He stops Werner Vertiz attempted assasination of his niece, returning him to prison.
2 years ago - 23-year-old Connor  joins the Justice League.  He confronts Merlyn when he assassinates a target in Star City, severely beating him and proving he is different than Oliver Queen.  Triggers new trials for everyone to ever survive a challenge from the Monkey Fist Cult while trying to save Shado.
Connor is often overlooked among the various Green Arrow legacy characters, despite the fact that he's the only one to ever actually take over the mantle.  It might actually be because he was created for the role when there were so many characters that had been around longer, most notably Ollie's actual longtime sidekick, Roy Harper.  While Connor was a Kelley Puckett creation, the same writer that created Cassandra Cain, he quickly became a very traditional Chuck Dixon character, loaded with martial arts intrigue.  ​

​It's actually outsider status that made Connor such an unique choice to become Green Arrow.  Ollie, for all his good qualities, was a terrible mentor.  It's the one quality that seems to stand out in his relationship with every character he's taken under his wing:  when he was really needed, he wasn't there.  Roy obviously bore the brunt of it, forced to handle his own addiction and self-destructive tendencies on his own.  In the end, Roy can only succeed when he forges his own path.  Connor suffered because of Ollie's abandonment as much as anyone, but he managed to do it and come out the other end better for it.  He grew up away from his father, learning skills that make him one of the best martial artists on the planet. This means that taking over the mantle of Green (or Red) Arrow is a step backward for Roy, but for Connor it's a way of embracing his legacy while still making it something new.