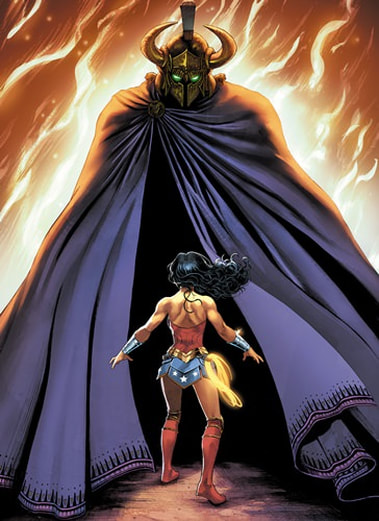 577 BCE - Ares has a passionate affair with Hippolyta.
576 BCE - Ares betrays Hippolyta, tricking Hercules to makewar on the Amazons and raping Hippolyta.  He influences Antiope to lead an a smal army of Amazons against Athens.
1939 - Ares influence in WWII attracts Hippolyta, to remain in mans world with Steve Trevor, joining the war effort.
12 years ago - Ares influences man's armies to allign against Circe.  Wonder Woman becomes the amazon's champion, halting his influence and sending him back into exhile.
​8 years ago - Ares approaches a heartbroken Valerie Beaudry, granting her physical beauty to become his champion and battle Wonder Woman.
7 years ago - Ares former champion Valerie Beaudry reclaims her briefly to aid Diana Prince during the Godwar before he reclaims it.
6 years ago - Ares awakens the lost tribe of Amazons and uses to attack Themyscera.  He is stopped only when Wonder Woman overcomes her exile and frees them from his control. He takes refuge with Circe, and they have a daughter, Lyta, together.
5 years ago - Ares defeats Artemis, freeing her only when Diana Prince sacrifices herself, only to escape the underworld with the sacrifice of Hippolyta and usurp the mantle of Goddess of Love to finally defeat him, casting him from the material plane.
3 years ago - Ares gives Cassie Sandsmark her own enchanted lasso, attempting to corrupt her.
The more you look at the classic Wonder Woman stories, the more you start to become aware of a startling fact:  this character had an intensely complex internal mythology that it really had to give up in order to be accepted as a part of the larger shared DC world.  The scope of her narrative was huge and mythic, a grand tapestry of gods and their influence of Earth.  There are elements of this still at play, but it's weirdly vestigial; it plays as a background narrative.  While Ares is still Wonder Woman's main antagonist, he opererates almost entirely behind the scenes.  This creates a unique opportunity for us to find a new balance for the role of the this particular villain in the world of one of the best characters in DC.