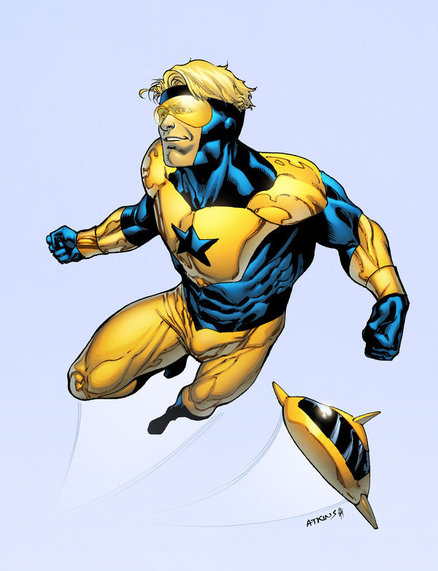 10 years ago - 24-year-old Michael Jon Carter appears in modern time, saves the president from an assassination attempt, and starts Goldstar Inc.
7 years ago - 27-year-old Michael joins the Justice League in its first major recruiting drive, where he befriends Ted Kord.
6 years ago - 28-year-old Michael meets Lorraine Reilly and begins an on-and-off relationship with her.
5 years ago - 29-year-old Michael tries to battle Doomsday even after most of the Justice League have fallen.  He ultimately fails, and feels responsible for Superman's death.  His costume is repaired after the battle by Rip Hunter.
3 years ago - 31-year-old Michael suffers a fractured spine while holding off the White Martian invasion during the Justice League's escape.
2 years ago - 32-year-old Michael, discovering the plans Ted Kord had made for a reimagined Justice League, uses all of Goldstar Inc to build the facilities and recruit the team.
2447 - Michael Jon Carter is born.
2454 - 7-year-old Michael's father runs away after gambling away all the families money, leaving them destitute.
2465 - 18-year-old Michael goes to college on a full football scholarship.
2468 - 21-year-old Michael's father resurfaces and convinces him to throw the national championship. He is discovered, and disgraced.
2471 - 24-year-old Michael steals several scientific artifacts while working as a janitor in a lab, and uses them to travel back in time to become a "hero". He is unaware that the time travel tech has been left for him by Rip Hunter to solve a paradox.
I'm an unapologetic fan of Booster Gold.  When he's at his best, he's an powerful character that can hold his own against Superman-level villains that has an incredibly heroic heart buried under layers of bravado and self doubt.  You usually just don't see characters with such human flaws in DC. If he were a Marvel character,  He'd be a front-runner for the Avengers.

He's been used to great comedic effect over the years, but limiting him to that role really undermines what a fantastic character he can be.  Having someone with real human failings that he has to overcome is fertile soil for great superheros stories, especially when the heights he's able to reach are so high.