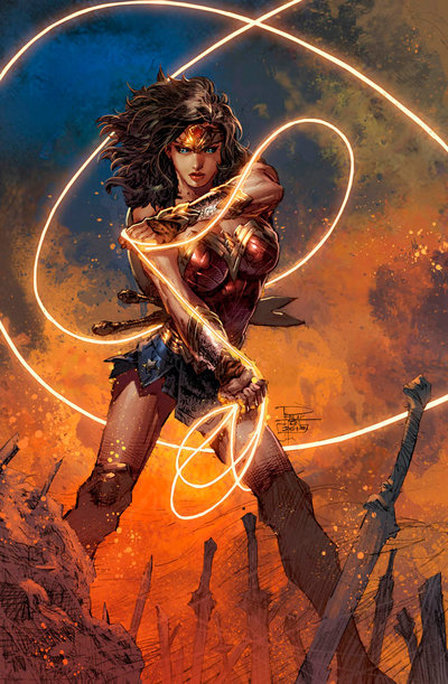 32 years ago - Diana is formed from clay by her mother Hippolyta and given life by the Goddesses.
26 years ago - 6-year-old Diana, lonely on an island of adult women, is granted an enchanted mirror that creates a playmate from her own reflection who is named Donna.
​22 years ago - 10-year-old Diana tried to close Doom's Doorway when the adult Amazons try to fight off the escaping creatures.  Sensing her strife, Her mirror-sister Donna sacrifices her immortality to assist her.  Donna is welcomed by the Amazons and acknowledged as Hippolyta's daughter and Diana's little sister.
12 years ago - 20-year-old Diana wins Hippolyta's tournament in disguise, winning the right to leave Themyscera and act as the Amazon's champion to stop the impending war between Circe and Ares, taking her mother's mantle as Wonder Woman.  She chooses to stay in Man's World, becoming roommates with 20-year-old Etta Candy at Gateway University, taking the name Diana Prince.  Begins working with Dr Helena Sandsmark to study Amazonian influence on the outside world, first meeting her young daughter Cassie Sandsmark. Soon she joins the Justice League.
​11 years ago - 21-year-old Diana Prince is captured by Doris Zeul who tries to siphon her spinal fluid, leaving her magically empowered. Donna Troy comes to visit her and chooses to become a student at Gateway University.  She befriends Barbara Ann Minerva, working with her to find powerful Amazonian artifacts from around the world. Edgar Cizko attempts to use how powers to control her, but she defeats him and he is imprisoned with his powers restrained.
10 years ago - 22-year-old Diana leads Etta Candy, Barry Allen & Hal Jordan into Themyscera to stop Felix Faust from siphoning the magic from the island to open Doom's Doorway.  She is victorious, but is banished from the island for bringing men to it's shores.  She also graduates from Gateway University.  She & Donna Troy work together to stop Red Panzer from committing a racial atrocity. ​She accompanies Bruce Wayne & Dick Grayson to the Fortress of Solitude to save Clark Kent from Mongul and his Black Mercy.
9 years ago - 23-year-old Diana establishes her own Amazonian embassy after the collapse of the Justice League with financial help from 23-year-old Etta Candy.
8 years ago - 24-year-old Diana becomes a Justice League reservist. She is betrayed by Barbara Ann Minerva, who takes a ceremonial knife to an african goddess of the hunt & performing a blood ritual with Amazonian magic to become Cheetah, stealing Diana's ability to commune with beasts.  She is attacked by Valerie Beaudry who has become the champion of Ares, but rather than hurting her she helps her discover her own inner beauty and overcome Ares influence.
​7 years ago - 25-year-old Diana has to navigate the Godwar between earth's pantheons created by Circe.  She is briefly aided by Valerie Beaudry when she briefly reclaims her powers.
6 years ago - 26-year-old Diana casts aside her powers and, with the help of Donna Troy, undertakes the labors of the gods so that she can overcome the barriers of Themyscera and save it from the lost Amazons corrupted by Ares. ​She is continually attacked by a newly empowered Doris Zeul.
5 years ago - 27-year-old Diana participates in a new tournament to select the amazonian champion, losing the title to Artemis.  She chooses to return to exile. When Artemis is taken by Ares Diana battles him directly, sacrificing her life to free her sister.  Hippolyta  sacrifices her life to free her from the underworld, and Diana usurps the mantle of the Goddess of Love to battle Ares, finally casting him from the material plane. She is called to Themyscera to serve as queen but instead chooses to elevate Antiope, her mother's sister from the lost Amazon tribe.  Diana & Doris Zeul assist Wally West in overthrowing Gorilla Grodd's regime in Gorilla City, earning her a retinue of Gorilla City commandos as honor guard for the Themysceran Embassy, & earning Doris Zeul her pardon.
4 years ago - 28-year-old Diana begins working with Dr Helena Sandsmark on a book about Amazonian history.  Her daughter Cassie Sandsmark steals Amazonian artifacts to become Wonder Girl.  When she returns them she manages to gain an audience with Zeus & impresses him, gaining her powers.  Diana and Artemis agree to help train her on Themyscera. She is poisoned by Barbara Ann Minerva, slowly reverting to clay, slowed only by her magic lasso. They battle within the depths of Barbara's god's domain, until Diana strips her of her curse and leaves her powerless in the jungle.
3 years ago - 29-year-old Diana is among the Justice League reservists that form the Watchtower after the White Martians decimate the League. Felix Faust manipulates the spells affecting Siobhan McDougal & Valerie Beaudry and uses them to attack Diana until they work together to overcome Fausts spells and their own possession. Edgar Cizko escapes and torments her until he is stopped by Cassie Sandsmark.
2 years ago - 30-year-old Diana begins working with the DEO.  Thomas Tresser becomes her handler.
now - 32-year-old Diana and the rest of the Watchtower head into space to save Superman from Warworld.
There is a LOT to unpack with Wonder Woman, and most of that is because she is the lone female character of her stature in all of comics. That's not necessarily a condemnation of comics in general, mind you, because there are very few characters of her stature, period.  Batman and Superman are basically it, and neither of them serve as the loan representation of their gender.  Wonder Woman holds an incredibly prestigious position in the history of comics, and it is hugely important how we handle both the character and her legacy.