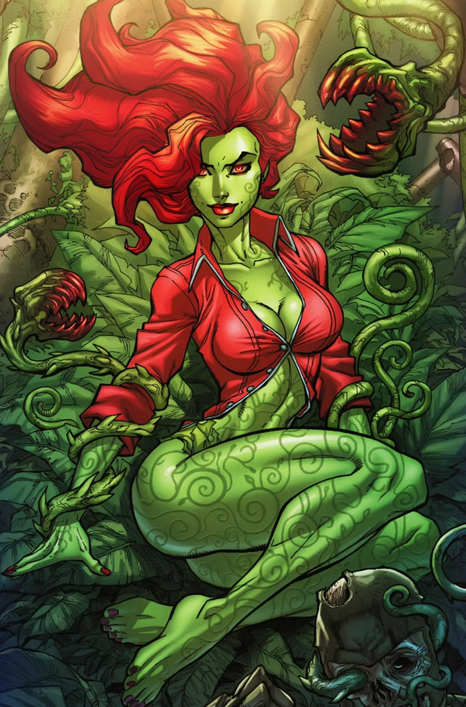 38 years ago - Pamela Isley is born.
35 years ago - 3-year-old Pamela is diagnosed with a skin condition that requires regular sunlight.  She spends most of her time in her rooftop garden.
31 years ago - 7-year-old Pamela's father kills her mother & buries her in the garden.  He is sent to prison & she's placed in foster care.
24 years ago - 14-year-old Pamela concocts a poisoned kiss that she uses to kill her father without suspiscion.
20 years ago - 18-year-old Pamela goes to college to study botany.  She has Jason Woodrue as a professor, and begins developing her brilliant hybrids.
16 years ago - 22-year-old Pamela graduates & begins her graduate work in Botanical Biochemistry.
13 years ago - 25-year-old Pamela's research funding is cut.  Enraged, she adapts her own biochemistry to become a plant hybrid, generating a variety of poisonous or mind-controling pheremones.  She threatens Gotham with her spore clouds and hybrid plants, demanding enough money to continue her research.  She is stopped by Batman when he manages to resist her.
10 years ago - 28-year-old Pamela escapes from Arkham and retreats from Gotham to a tropical island.  She is persued by Batman, but when they work together to stop the local government from testing weapons on the locals, he agrees to allow her to remain.
8 years ago - 30-year-old Pamela joins Swamp Thing as he battles Jason Woodrue's attempt to usurp his role as defender of the Parliment of Trees.  She retires to a flower shop in Gotham, promising to help the green.
5 years ago -33-year-old Pamela's location is exposed as part of Edward Nygma's grand scheme.  She attacks and almost kills him, only held back with Barbara Gordon's help.  She is sent back to Arkham.
3 years ago - 35-year-old Pamela escapes Arkham during No Man's Land.  She takes over and protects Robinson Park, protecting a group of homeless children.  She is taken prisoner by Basil Karlo but is rescued by Batman. She is returned to Arkham.
1 year ago - 37-year-old Pamela befiends Harley Quinn in Arkham.  When the Joker comes to free Harley he tries to make her kill Pamela, and beats and abandons her when she can't. They escape together, and have adventues as they leave the city & travel the country.
now - 38-year-old Pamela returns to Gotham with Harley Quinn to confront the Joker.
While always considered on of the central members of Batman's rogues gallery, Poison Ivy is also very much set apart from the rest because her motivations are so completely different.  She's not a thief, or a psychopath... She's incredibly dangerous, but really only when she's threatened.  Unlike so many of the other villains that are proactive, she tends to be content when she's isolated, and only becomes a threat when some outside force disrupts her solitude.

But of course, she wasn't always depicted this way, and how she got to be what she is is actually an interesting notion to explore.