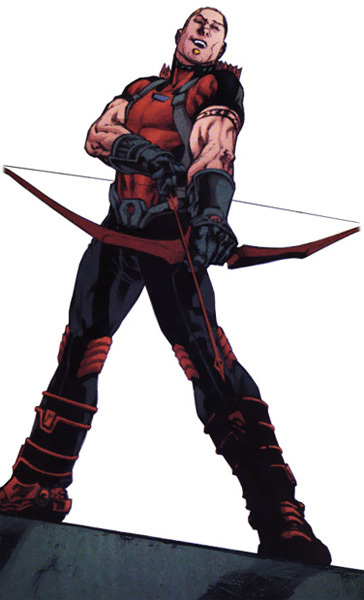 25 years ago - Roy Harper is born, the son of a forest ranger & a native american tribal leader's daughter.
18 years ago - 7-year-old Roy's father dies, and he goes to live with his mother's people on their reservation, where he is taught by his grandfather Brave Bow.
13 years ago - 12-year-old Roy is taken in by 29-year-old Oliver Queen when Brave Bow dies, and becomes his sidekick, Speedy. They regularly battle new Star City vigilante, Eric Needham.​
11 years ago - 14-year-old Roy joins the Teen Titans.
10 years ago - 15-year-old Roy isn't asked to join Raven's Teen Titans.  When 32-year-old Oliver Queen goes traveling with 31-year-old Hal Jordan, Roy begins his casual drug use.
9 years ago - 16-year-old Roy attempts to commit suicide by attacking Waylon Jones, but when Croc realizes what he's doing he won't continue.
8 years ago - 28-year-old Dinah Lance discovers 17-year-old Roy's heroin habit & takes him to rehab.
6 years ago - 19-year-old Roy has an affair with the terrorist Cheshire, before she detonates an atomic bomb in Quarac.
5 years ago - 20-year-old Roy adopts his new role as Arsenal, and gets government backing for a new Titans team.  He brings Cheshire to justice & gains custody of their newborn daughter Lian.
4 years ago - 21-year-old Roy joins the newly reformed original Titans, and brings in Jesse Quick & Argent from his government team. He battles Red Panzer alongside Donna Troy & Kyle Rayner.
3 years ago - 22-year-old Roy & Nightwing build a new Outsiders team in the aftermath of Donna Troy's death & the end of their Titans team.
2 years ago - 23-year-old Roy becomes the sole leader of the Outsiders when Nightwing leaves the team to become a cop.
1 year ago - 24-year-old Roy joins all the surviving Titans in space to save Donna Troy.  He gives Mia Dearden his old quiver.
now - 25-year-old Roy joins Nightwing's new Watchtower.
Roy Harper is called "Red Arrow" in modern comics, but that entire identity was an attempt to put him in a box, and a character like Roy completely defies that sort of thing.  Arsenal is the black sheep of his entire generation of heroes, and one of the most dynamic characters comics has to offer.  Sometimes a character might start out as someone's supporting character, but they grow past that and become something so much better.