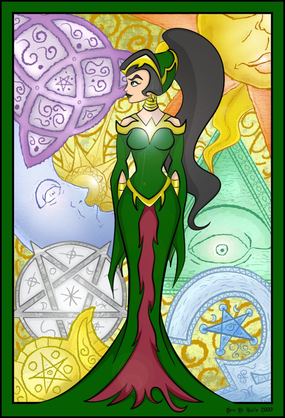 447 - Morgaine Le Fay is born the daughter of Vivienne, the Lady of the Lake
462 - 15-year-old Morgaine falls in love with Uther Pendragon.  Her heart is broken when he loves another.
475 - 28-year-old Morgaine taps the resurgance of Magic when Arthur Pendragon is given Excaliber, beginning to weild it for herself, slowing her aging.
478 - Morgaine becomes Merlin's apprentice.
483 - Morgaine and Merlin become lovers.
489 - Morgaine is rejected by Merlin because of her hunger for power.  She swears revenge.
490 - Morgaine watches as Arthur Pendragon's rebellion begins.
494 - Morgaine's sister Nimue Inwudu is born.
499 - Morgaine brings her sister Nimue Inwudu into her magical circle.
504 - Morgaine nearly defeats Merlin, but is stopped by Sir Justin, forcing her to make new plans.  She bewitches Arthur Pendragon and gives birth to his son Mordred.
510 - Morgaine's sister Nimue Inwudu is seperated from her power by the Phantom Stranger.
511 - Morgaine curses Sir Justin when he discovers her treachery.
513 - Morgaine bewitches Jason Blood.
517 - Morgaine and Mordred's forces attack Camelot.  Jason Blood betrays the city, and Morgan in turn betrays him, beginning to open Etrigan's hellfonts to consume the city.  Merlin forges the 2nd Shadowpact to cut Morgan off from her power.  She and Mordred are trapped within the Paths Beyond.
1943 - Morgaine breaks free of the Paths Beyond during the 3rd Shadowpact, but has lost all her power
35 years ago - Morgaine discovers a magical source to regain her youth and power.  She is stopped from freeing Mordred from the Paths Beyond by Jason Blood & Zatara.
33 years ago - Morgaine battles the All-Star Squadron, and is defeated by Sir Justin.
22 years ago - Morgaine opens the Paths Beyond to free Mordred.  She is stopped by Sir Justin, who chooses to adventure within and close them behind him.
7 years ago - Morgaine draws power during the Godwar.  She battles Janissary for possession of the Eternity Book.
2 years ago - Morgaine steals an artifact from Themyscera and frees Mordred from the Paths Beyond.  They are only stopped by the combined strength of the Justice League.
It's worth noting that Arthurian legend extends over hundreds of years and that entire fields of study go into the reading and translating of it.  Early versions of Morgan Le Fay depicted her as a powerful sorceress or fay creature, but the idea that was in any way malicious came much later in the evolution of these stories.  The slow metamorphasis of Morgan into a villain is actually a topic of vast literary importance, because it functions as an indicator of English societies villification of 'pagan' religions in favor of christianity.

This is just in my own casual reading, obviously... Arthurian scholars have written at length about these stories for decades.  It's one of my favorite fields of academia.

In the meantime... Morgaine Le Fay is actually a weirdly important character in DC's story, even though she comes from an entirely different literary tradition.