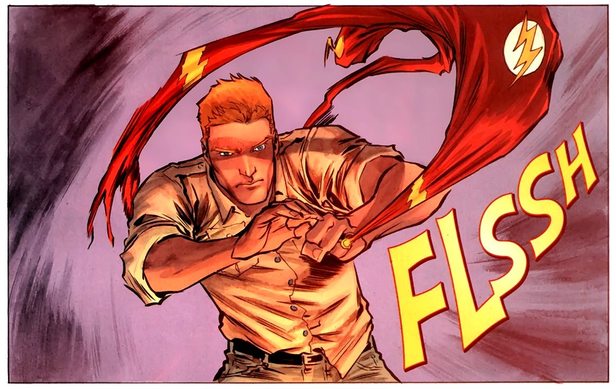 43 years ago - Barry Allen is born.
25 years ago - 18-year-old Barry begins studying chemistry & forensic science.
21 years ago - 22-year-old Barry graduates and begins his postgrad work while apprenticing in the Central City police department.
19 years ago - 24-year-old Barry first meets Iris West.
18 years ago - 25-year-old Barry gains his speed force powers in a lab accident & becomes the Flash.  He is assisted in learning about the speed force by scientist Clyde Mardon (brother of Mark Mardon).  Roscoe Dillon refuels his powers from his speedforce connection, becoming the Top again.
​17 years ago - 26-year-old Barry first tangles with Leonard Snart, who steals a miniature cyclotron, completes his first cold gun and becomes Captain Cold.  His ally Clyde Mardon dies in an accident caused by his brother Mark Mardon, who becomes Weather Wizard. Sam Scudder escapes prison & become the Mirror Master.
16 years ago - 27-year-old Barry is a founding member of the Justice League, and he first meets Wally West, Iris's nephew. Lisa Snart first becomes Golden Glider. Clifford Devoe develops his thinking cap and becomes the Thinker, planning elaborate crimes across the city to prove his superiority. James Jesse unleashes a massive prank-based crimewave as the Trickster.  He first battles Albert Desmond  as Doctor Alchemy.
15 years ago - 28-year-old Barry is first confronted by Eobard Thawne, a refugee from a lost future timeline and expert at speed force manipulation who is obsessed with using Barry to return home. Digger Harkness challenges him with his signature boomerangs as Captain Boomerang. Leonard Snart learns Barry's secret identity and strikes a deal with him to allow for leniency as long as he keeps his crimes non-violent.  He first forms the Rogues.
14 years ago - 29-year-old Barry takes on Wally West as Kid Flash when he gains similar powers in a lab accident.  Roscoe Dillon's powers flare.  He attacks the Rogues and battles Barry, ultimately dying as the Speed Force consumes him.
​13 years ago - 30-year-old Barry & Wally West team up with Leonard Snart to stop Eobard Thawne when he begins his takeover of the Rogues by killing Lisa Snart & Sam Scudder.  Hartley Rathaway first becomes Pied Piper.
​12 years ago - 31-year-old Barry & Wally West are able to seperate Albert Desmond from the philosopher's stone.
11 years ago - 32-year-old Barry marries Iris West. Barry & Wally West fight against Gorilla Grodd's invasion.  They are assisted by the Rogues once they realize Grodd's plan.
10 years ago - 33-year-old Barry goes to Themyscera with Diana Prince, Etta Candy  & Hal Jordan to stop Felix Faust from opening Doom's Doorway, becoming one of the only men to ever set foot on the island. Clifford Devoe stages a crimewave in Central City using his mind control technology, looking to permanently upload his consciousness into his computers.  He falls into a coma when he is stopped by Barry & Wally West. When Albert Desmond is overwhelmed by the philosopher's stone and again becomes Doctor Alchemy, Barry & Wally use Desmond's formula to destroy it & free him.  Evan McCulloch arrives as the new Mirror Master, confronting Barry & Wally.
9 years ago - 34-year-old Barry is expelled from the Justice League when Eobard Thawne attempts to draw him into the Speed Force by trying to Murder Iris West. When he tries again they are both drawn inside.  Barry outruns him, managing to save Iris by depositing her in the 30th century before he is absorbed into the Speed Force, while Eobard is killed.
The legacy of Barry Allen is further reaching than almost any other character in DC.  He's the very first character of the SIlver Age, and the very first classic character to pass on his legacy to his protege.  He's also the character who's return marked the true downfall of DC's continuity. There were mistakes before him, but his death was too big, and too much a part of the bedrock of the story.  Once he returned, there was nothing left for DC to do but push reset on everything in the New 52.  It could be argued that Barry is responsible both for the beginning and the end of the DC universe as we know it.