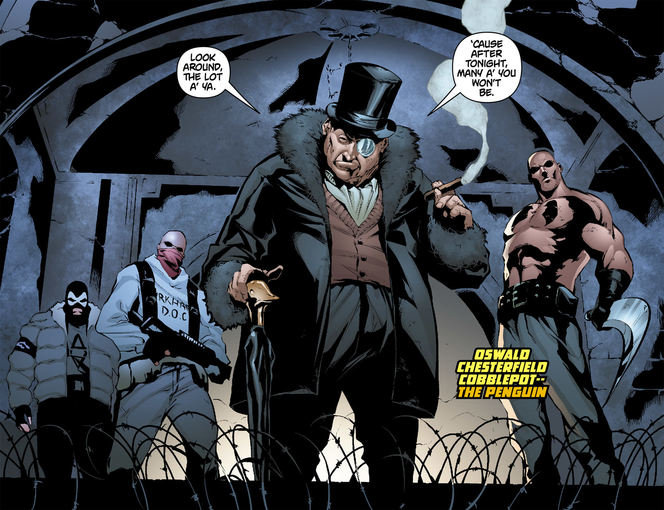 43 years ago - Oswald Cobblepot is born, his mother exhiled to Gotham from England by a local crime lord for his father's theft.
29 years ago - 14-year-old Oswald becomes a low-level runner for Tony Zucco, and underboss to Sal Maroni.
24 years ago - 19-year-old Oswald is paid by Carmine Falcone to kill Sal Maroni's father Luigi.  He is sent back to England where he kills the man gunning for his family and takes over his gun-running operation.
18 years ago - 25-year-old Oswald returns to Gotham, his operations quickly take over all of Gotham's docks.
14 years ago - 29-years-ago Oswald takes over the Zucco's territory when they are brought down by Batman & Robin.  He attones for the death of Sal Maroni's father Luigi, allying himself with the Maronis as they end the truce with Carmine Falcone.
12 years ago -  31-year-old Oswald secretly agrees to a non-aggression pact with Carmine Falcone.
11 years ago -  32-year-old Oswald hires Julian Gregory Day & Johnathan Crane to kill Alberto Falcone, son of Carmine Falcone, in the middle of Roman Sionis's bid to take over Sal Maroni's organization.  He quickly moves to take over Falcone's territory, establishing himself as the main rival to Black Mask.
10 years ago -  33-year-old Oswald, one of the only criminals in Gotham that can stand up to him,  hires the Joker to sew chaos with Roman Sionis's organization, driving him to accept a truce with Oswald, allowing him to appear to 'go legitimate' with the Iceburg Lounge while Black Mask appears to run all of Gotham.
9 years ago - 34-year-old Oswald plays a game of poker against Victor Zsasz, taking him for everything he has.
5 years ago - 38-year-old Oswald props up failed mayor Rupert Thorne as a figurehead of Roman Sionis's organization after he is killed by Selina Kyle to continue to appear legitimate.
4 years ago - 39-year-old Oswald breaks up his organixation under a variety of underbosses after Jean Paul Valley kills Rupert Thorne, now the sole head of organized crime in Gotham.  Arnold Wesker takes over a portion ofThorne's territory after his death, paying up to Cobblepot becoming a rival & underling.
3 years ago - 40-year-old Oswald allies with Lex Luthor to act as a source of vital resources during No Man's Land, amassing a fortune.
2 years ago - 41-year-old Oswald attempts to branch his organization into Bloodhaven but is stopped by Tobias Whale.
1 year ago - 42-year-old Oswalds underbosses begin to report being shaken down by the Red Hood.
For a very long time if you were to naming Batman villains, the second name that would pop up in yourt mind after the Joker would be the Penguin.  In a rogues gallery of colorful thieves, he had a different silouette and a clever gimick with his umbrellas, and it worked well within the framework of the classic cartoonish Batman.

The world of Batman was slowly, deliberately changed into something more deliberately dark and serious, and slowly each of those classic villains was reimagined.  The Penguin became more dangerous, but his overall modus operandi didn't change that much.  It took some innovations made outside the comics, most notably in the Animated Series, to find a very particular role in the world of Gotham that he just so happened to fill better than anyone.