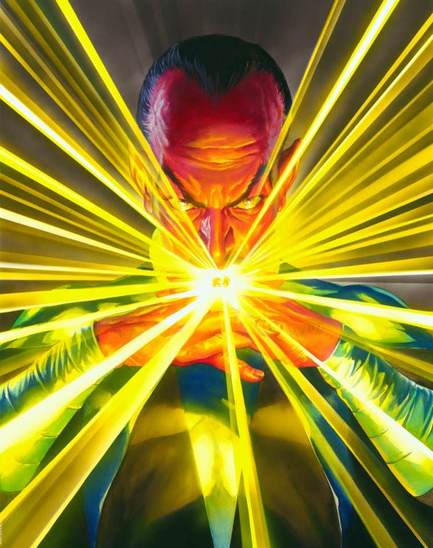 1916 - Thaal Sinestro is born on Korugar.
1938 - 22-year-old Sinestro becomes an anthropologist dedicated to preserving the remains of the ancient civilizations of Korugar.
1942 - 26-year-old Sinestro witnesses the fall of Green Lantern Prohl Gosgotha, persued by a Weaponer of Qward.  He uses the ring to bring down the Korugar ruins on the Qwardian to kill him, and then allows Prohl to die rather than return his ring, joining the Green Lantern Corp & meeting Abin Sur. He goes on to stem the expantion of the Weaponers and confine them to Qwardian Space.
1951 - 35-year-old Sinestro marries Arin Sur, the sister of his partner Abin Sur.
1954 - 38-year-old Sinestro begins to take on political power on Korugar, beginning his regime, ruling his people through fear.
18 years ago - Sinestro is assigned Hal Jordan as a trainee Green Lantern.  Hal undermines his control of Korugar, exposing him to the Green Lantern Corp.  He is stripped of his rank and banished into Qwardian Space  He leads a revolution against Kalmin the High Thunderer, becoming the new leader of the Weaponers of Qward.
16 years ago - Sinestro recieves a new yellow anti-oan power ring from The Weaponers of Qward.
13 years ago - Sinestro returns to Guardian space, assaulting several Green Lanterns inside their own sectors until he is stopped by Hal Jordan & his new apprentice Arisia Rrab.
11 years ago - Sinestro attacks Earth, Injuring both Hal Jordan and his backup lantern, Guy Gardner. A new Green Lantern of Earth, John Stewart, is chosen and defeats Sinestro. The Weaponers of Qward stage an assault to free him.
8 years ago - Sinestro and the Weaponers of Qward stage a massive coordinated assault of Citadel Space, exploiting the divide between the Guardians of Oa.  He is ultimately stopped by Hal Jordan and the Green Lantern Corp.  He is trapped on Earth with a vastly depowered ring & joins Dr. Sivanna's Secret Society to attack the Justice League, but has his ring stolen by Guy Gardner and is imprisoned in the Oan Power Battery.
5 years ago - Sinestro is released from the Power Battery by the Green Lantern Corp in a last-ditch effort to stop an insane Hal Jordan.  Their battle destroys much of Oa.  He is presumed dead, but is in fact saved by Amon Sur, fellow prisoner of the Oans and estranged son of his deceased former partner Abin Sur.  Together they retreat into Qwardian Space, breeching the prison of the Weaponers of Qward.
3 years ago - Sinestro's Lieutenant Amon Sur recovers two more followers Arkillo & Karu-Sil.  They are all armed with pared-down versions of his yellow ring. They mobilize the Weaponers of Qward, building up their war efforts to take surrounding sectors.
1 year ago - Sinestro's forces are discovered by Kyle Rayner, who races across the galaxy to collect surviving Green Lanterns to restart the Oan Power Battery and reignite the Green Lantern Corp.  In the ensuing battle he is again captured and imprisoned on Oa.
There is a pedigree of villany that really doesnt get hit anywhere outside of comics.  When people make lists of the greatest bad guys of all time, you will see names like Darth Vader, Hannibal Lecter, Professor Moriarty, Nurse Ratched, Sauron... and they're all fantastic, there's no doubt, but it's very hard to stack them up against bad guys like Doctor Doom or the Joker and wonder why we're even asking this question.  There's a very particular magic that comes from the way comics allow a certain element of childish fantasy to run rampant with your adult concepts of science, fantasy and storytelling that allows characters to really strike chords that are impossible anywhere else.

Sinestro is a very special blend of brilliant ideas that you could never get outside a comic book.  He's at once a mirror version of his nemesis; a classic mustache-twirling, cackling pastiche of snidely whiplash (complete with mustache), and nothing less than a fully realized space-hitler.  There is no way anything with this much absolutely bonkers scope could happen anywhere else.