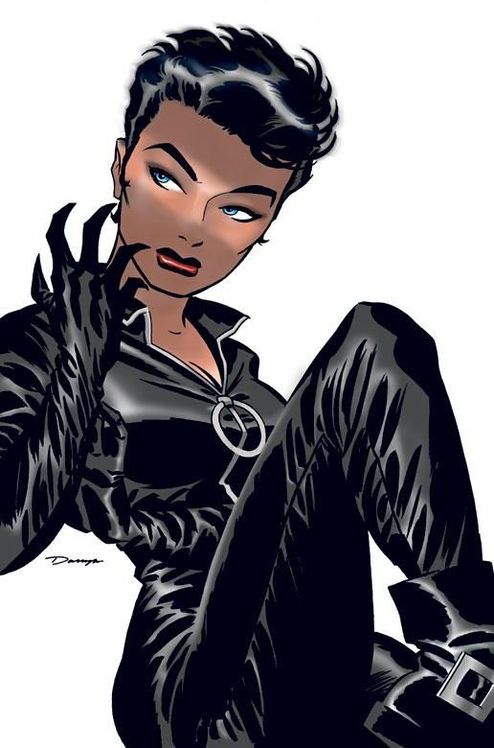 ​35 years ago - Selina Kyle is born in the Gotham Slums.
31 years ago - 4-year-old Selina's mother commits suicide, leaving her with her alcoholic father.
​28 years ago - 7-year-old Selina runs away from home rather than watch her father drink himself to death.  She survives on the street.
26 years ago - 9-year-old Selina is arrested on the street & placed in the care of a corrupt social worker.
22 years ago - 13-year-old Selina catches her social worker embezzling city funds and is left to drown.  She escapes, blackmails her would-be murderer into wiping her identity from Gotham's records, & steals her diamond necklace.
20 years ago - 15-year-old Selina falls in with a group of street thieves led by Mama Fortuna.  When she refuses to follow the rules, she is beaten by one of the thieves; Jack Chavez.  Later, she follows him to a hidden dojo where she earns a place as a student.  Jack is kicked out of the school when he beats her almost to death.  When she heals, she begins pulling riskier burglary jobs.
18 years ago - 17-year-old Selina saves her neighbor's daughter Holly Robinson from a corrupt cop.  She starts looking out for her.
​16 years ago - 19-year-old Selina, now Gotham's premier cat burglar, takes a luxury apartment and begins mingling with Gotham's elite.  She leaves thousands of dollars for Holly & her mother, telling them to take care of each other.
​14 years ago - 21-year-old Selina meets Batman, and decides to become Catwoman.
​9 years ago - 26-year-old Selina rejects an offer from Roman Sionis to work for him.  Her past is exposed by a mysterious photo leak, and she loses her lavish lifestyle & returns to her apartment in Gotham's East End.  She continues to work as a burglar, but when she meets private detective Slam Bradley she's encouraged to also work to protect the people of East End.
​8 years ago - 27-year-old Selina is reunited with Holly Robinson, who becomes her roommate & confidant.
​7 years ago - 28-year-old Selina is attacked by her old nemesis Jack Chavez, but she defeats him, handing him over to Batman.
​5 years ago - 30-year-old Selina discovers that it was Roman Sionis that leaked her photos when she rejected him.  He kidnaps and tortures Slam Bradley, and almost kills Holly Robinson before she escapes, all trying to break Selina.  She confronts him, and in a moment of desperation she shoots and kills him, ready for his men to kill her in retaliation.  Batman saves her, and finally condones her work in the East End.  She ​meets Tim Drake, giving him some insight into Batman.
​4 years ago - 31-year-old Selina knows immediately that Jean Paul Valley isn't Batman.  Bruce Wayne reveals his identity to her, and she helps him recover his batsuit and reclaim his mantle.  Their relationship moves forward.
​3 years ago - 32-year-old Selina is pregnant.  She retires as Catwoman, handing over the mantle to Holly Robinson.  To keep her daughter Helena safe, Bruce Wayne recommends that she be sent to Phantom Lady's Universite Norte Dame Des Ombres.  Bruce pays for her tuition and board, and Selina visits her regularly, all the while keeping their connection secret.
now - 35-year-old Selina returns to Gotham when Holly is nearly killed by the Penguin & his thugs, and becomes Catwoman again to get payback.
Powered by