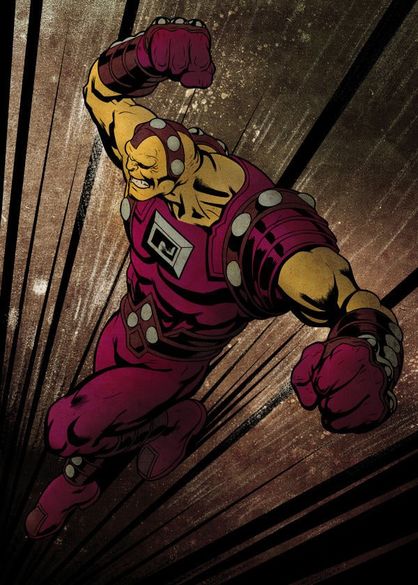 1726 - Mongul is born, the son of the ruler of Warworld
1782 - Mongul kills his father and takes the throne of Warworld
11 years ago - Mongul captures Superman for the fighting pits of Warworld.  He is defeated by the Justice League, and deposed of his throne.
10 years ago - Mongul attempts to get his revenge on Superman by breaking into his Fortress of Solitude and exposing him to the Black Mercy, trapping him in an illusion of his own ideal world.  He is defeated by Batman, Robin, and Wonder Woman.
8 years ago - Mongul discovers Hank Henshaw's datacore drifting through space. His physical body is reconstituted, using elements of the kryptonian DNA.  They uses his technology to begin forging the Warseed, a device to begin constructing a new Warworld from the raw material of a city.
5 years ago - Mongul comes to Earth, activating the Warseed and destroying the Warseed with the help of Hank Henshaw, destroying Coast City, driving Hal Jordan insane.  He is defeated by Superboy, Steel, The Eradicator & the returning Superman.
4 years ago - Mongul is confronted in deep space by Kyle Rayner, who manages to beat him on his own.
1 year ago - Mongul is broken out of prison by Dru-Zod & Faora and begins assisting them in the construction of their spacefleet.
now - Mongul regains his throne when Faora defeats the current champion.  When Dru-Zod captures Superman and Lois Lane, they are inprisoned on Warworld.
In a universe that has Darkseid & the New Gods, it is kind of interesting that Mongul exists.  He's essentially a spinoff of a copy of Darkseid.  Still, he has a number of stories to his credit that are truely fantastic, and unlike Darkseid you don't really have to break reality every time he rears his head.  Mongul is an incredibly versitile villain, and he really needs to be used more often.