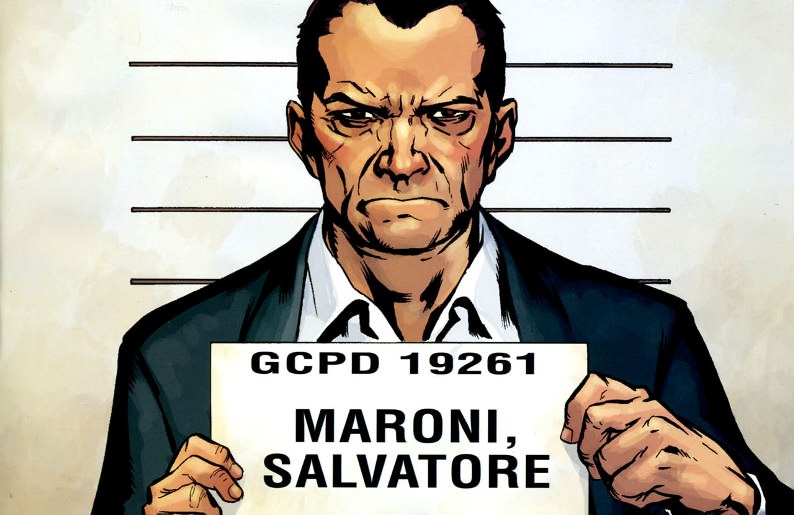 43 years ago - Sal Maroni is born the heir to the Maroni Crime Family.
33 years ago - 10-year-old Sal's father shoots Carmine Falcone, starting a war between their families.
31 years ago - 30-year-old Carmine attends the funeral of Thomas Wayne, where he promises Bruce Wayne one favor.
27 years ago -  16-year-old Sal goes to boarding school in Italy.
24 years ago -  19-year-old Sal's father is killed by Oswald Cobblepot.  He returns from Italy to take over the family.
20 years ago - 23-year-old Sal ends the war between the families when he agress to the truce conditons proposed by Carmine Falcone.
14 years ago - 29-year-old Sal brings in Roman Sionis as an enforcer & allies with Oswald Cobblepot's organiation just as Carmine Falcone's DA is brought down by Batman, Harvey Dent, & Lieutenant Gordon, effectively restarting the war between the families.
11 years ago - 32-year-old Sal is brought in by Batman.  Carmine Falcone contacts him, offering protection if he attacks Harvey Dent in the court room.  The plan goes through (although Dent survives.) Sal attempts to escape prison, thinking Roman Sionis will help him,  but is betrayed when Sionis pays Julian Gregory Day to kill him.
Early Batman comics heavily featured traditional organized crime figures, many of whom only appeared once.  There are exceptions, of course... Boss Zucco was  the gangster that killed Dick Grayson's parents, Joe Chill was the street thug the killed Bruce's.  Otherwise, you saw a lot of very casual name drops over the years that didn't really amount to much.