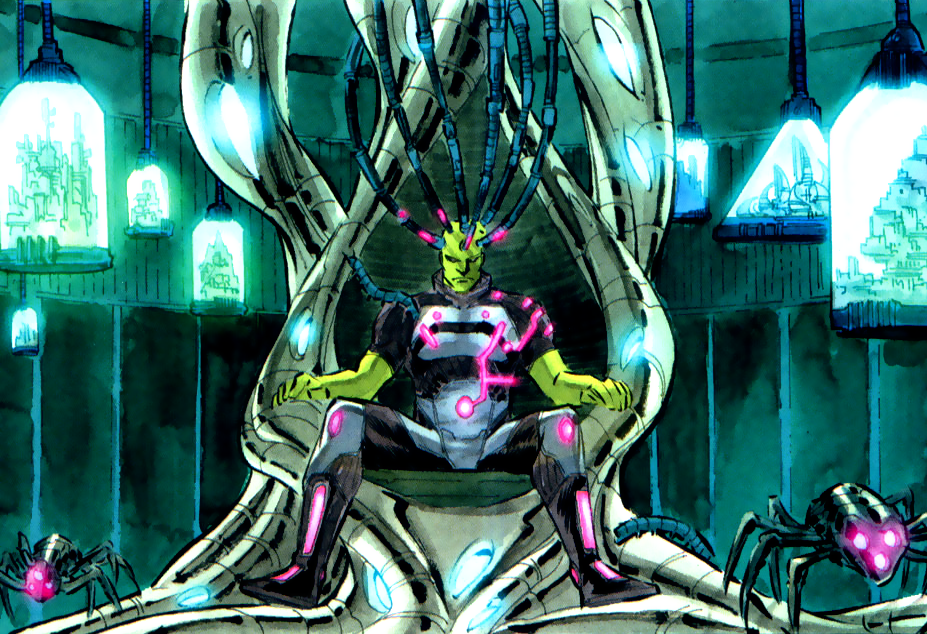 1890 - Vril Dox is born among the science caste of Colu.
1918 - Vril Dox joins the science elite.
1939 - Vril Dox first begins augmenting his own intellect cybornetically.
32 years ago - Vril Dox breaks from the Computer Tyrants of Colu.  He begins using extra-spatial tesseract technology to steal entire populations of underdeveloped planets to use in his experiments, storing them in a hyper-spatial nexus called Kandor.
25 years ago - Vril Dox crafts a clone of himself to give over to the Coluans, abandoning his own genetic markers to make himself distinct, taking the name Brainiac.
19 years ago - Brainiac 6.0 comes back in time using stolen technoloy to kill Clark Kent before he becomes Superman.  He is stopped by Rokk Krinn, Imra Ardeen & Garth Ranzz  of The Legion of Super-Heroes, who use their temporal tech to finally destroy Brainiac.
11 years ago - Brainiac attempts to steal specimens for Kandor from Earth.  His biological body is decimated in his battle with Superman, who stores the nexus of Kandor in the Fortress of Solitude.  Brainiac's preserved brain begins constructing an entirely android body.
10 years ago - Brainiac's worldship begins terrorizing whole planets as it actively drains away all knowledge.
8 years ago - Brainiac manipulates Maxima of Almerac to declare war on Earth.  Superman defeats her, and together they fight Brainiac as he attempts to steal the population of Metropolis.  he is ultimately stopped by Lex Luthor.
4 years ago - Brainiac nanoclusters corrupt Lexcorp systems and hijack a satellite launch, stealing Kryptonian biosamples.
1 year ago - Brainiac's drones attack the entire solar system, and Brainiac 2.0 emerges from within his ship, having grown a new biological body.  Superman and the entire Watchtower stop him.  He is kept in suspended animation on New Genesis.
now - Brainiac's data nanomodules are moved from cold storage into Lexcorp facilities when Lex Luthor is contracted to extract their data.
2730 - Brainiac 3.0 constructs Brainiac 4.0, a sleeper weapon meant to target Superman in the past.  Vril Dox corrupts the programming of Brainiac 4.0  The corruption allows her alternate personality to assert it's dominance, becoming Indigo.  She fights Brainiac 3.0 before escaping into the past, allowing Vril to finally destroy Brainiac 3.0.
2992 - Brainiac 6.0 activates when his failsafe programming finishes compiling.  He attacks the headquarters of the Legion of Super Heroes to steal Querl Dox's technology to go back in time to kill Clark Kent before he becomes Superman.
Powered by