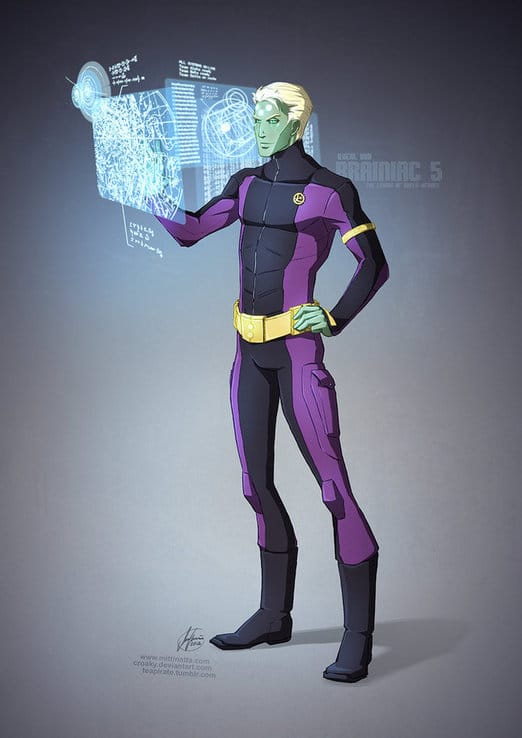 2978 - Querl Dox is created on Colu by the clone descendants of Vril Dox.
2991 - ​13-year-old Querl Dox joins the Legion of Super-Heroes in their first recruitment drive.  He designs their headquarters and equips the team with flight rings.
2992 - 14-year-old Querl's time technology is stolen when Brainiac 6.0 activates and attacks the headquarters of the Legion of Super Heroes to go back in time to kill Clark Kent before he becomes Superman.  Querl contacts Rip Hunter to consult on his hypertime proof.  He conducts his temporal experiment, sending back Rokk Krinn, Imra Ardeen & Garth Ranzz to stop him.  He also sends a message back to Vril Dox who is still in prison in the Starlog.
2993 - 15-year-old Querl employs Salu Digby after her attempt to join the Legion of Super-Heroes to instead assist in his Macroverse experiments.
2994 - 16-year-old Querl enhances Salu Digby's powers to employ her against the White Triangle Daximites.
2995 - 17-year-old Querl discovers Connor Kent's body sealed in it's tomb inside the Phantom Zone. He revives him, and after some time manages to align his temporal technology to send him back.  His work in the Phantom Zone allows him to discover the planet Bgztl and Tinya Wazzo.
2997 - 19-year-old Querl is approached by Don Allen & Meloni Thawne to save the life of their son Bart Allen.  He uses his temporal tech to send him back in time to meet Wally West. ​He uses a bio-synthetic trojan virus hidden in a sample of Lyle Norg's blood to hack into the entire Science Police network. he uses his access to implicate Jo Nah in the death of his childhood girlfriend to allow him to infiltrate a criminal organization.
2999 - 21-year-old Querl witnesses the accident that bathes Drake Burroughs in anti-energy, converting his body to energy.  he is able to contain him and build him a suit, bringing him into the Legion of Super Heroes as Wildfire.
3000 - 22-year-old Querl is among the legion members lost in a distant galaxy.  He retreats to the old L.E.G.I.O.N. base after the Legion of Super-Heroes is disbanded and begins retrofitting it into Legion World. He unlocks Luornu Durgo's ability to mass duplicate and she staffs Legion World.
3003 - 25-year-old Querl devises a way to re-collect the ambient energy of Drake Burroughs.
3005 - 27-year-old Querl is approached by Reep Daggle to reform the Legion of Super-Heroes to end the rule of the Dominators reveals Drake Burroughs as a secret weapon.  He repowers Rokk Krinn.  He contacts  Tasmia Malor & Tinya Wazzo and manages to restructure her powers.
3007 - 29-year-old Querl retrieves Val Armorr from within the Haplashar Terminus before the black hole opens to battle Earth Man and the Justice League of Earth. His Legion World is recognized as a planet by the United Planets, making Querl a world leader.
Powered by