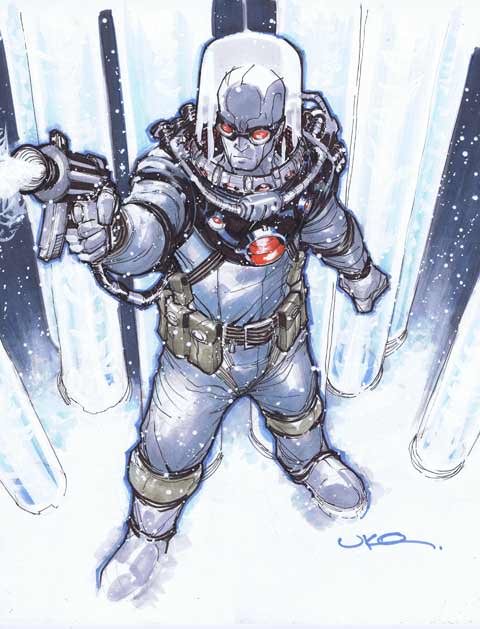 47 years ago - Victor Fries is born.
41 years ago - 6-year-old Victor's parents discover him freezing live animals.  He is sent to boarding school where he is ostracised & tormented.
29 years ago - 18-year-old Victor begins college, studing biology.
27 years ago - 20-year-old Victor meets his future wife Nora.
25 years ago - 22-year-old Victor begins grad school.
23 years ago - 24-year-old Victor marries Nora, and begins his doctoral thesis.
21 years ago - 26-year-old Victor earns his doctorate in Cryogenic Biology.  He begins running the cryogenics lab for Goth-Corp.
20 years ago - 27-year-old Victor's wife Nora develops a congenital disease without a known treatment.  Victor begins working to cure her, requireing him to periodically place her in suspended animation.
17 years ago - 30-year-old Victor's cryogenic technology is used for a non-lethal freeze gun by Cybertech in a deal with Goth-Corp.
14 years ago - 33-year-old Victor's use of his cryogenic lab to preserve his wife is discovered by Goth-Corp executives.  they try to shut him down, and he is inadvertently bathed in experimental cryogenic fluid.  He kills the men responsible, escapes and creates his own lab, using diamond-enhanced cryotech to steal the necessary funds to maintain his lab and save his wife, abandoning his title as doctor and instead embraces his role as Mister Freeze.  He is stopped by Batman, but is permitted to continue his research in the controlled enviornment of Arkham.
5 years ago - 42-year-old Victor escapes to attempt his final cure, a device that will save Nora but will freeze the entire city.  He is stopped by Batman.  he looses his arms and legs to the machine, but Nora is saved.  She rejects him for what he has become.
3 years ago - 44-year-old Victor escapes from prison with Caitlyn Snow, who helps him construct a new cybornetic cold suit before he betrays her.  He remains at large.
1 year ago - 46-year-old Victor joins the Legion of Doom.
There have been so many interpretations of the Batman story in so many mediums.  This is part of why his rogues gallery is considered one of the best in comics, because there have been so many opportunites for his villains to be reinterpreted by so many different people, that many of his villains only achieved their prominence years after their invention.

One of the best examples is Mister Freeze.  He's a terrifyiing but tragic figure with a fantastic story, but he wasn't invented that way.